IG NEWS
HomeWorldHundreds of Kandahar residents say the Taliban have told them to leave...
World 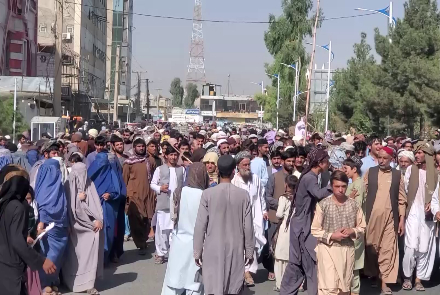 Hundreds of people protested in Kandahar yesterday (Tuesday, September 26) in response to the Taliban’s decision to leave government houses.

The protesters do not know exactly which provincial administration office has ordered them to leave their homes.

The protesters added that they had been living in the houses for years, but had now been unofficially ordered to leave by the Taliban.

One protester said: “We have been living in this sectarian area for 20 years. We accept that these are government places but we have been given them. We have built houses on them and we have paid our personal expenses. For days the Taliban have been announcing to us that we must leave these houses.
Meanwhile, a local journalist claimed that the Taliban had beaten him while covering the protest.

Journalist Bismillah Watan Dost said: “I was interviewing a woman during the protest, although I had taken permission to videotape and interview before the protest, but another group of Taliban came and took me back. Then beat me like that.))

The Taliban did not comment on the beating of the journalist in response to the protest, but said in a statement that the protesters could stay in the houses for the time being but would decide whether to stay or leave. The direction should be followed by research.